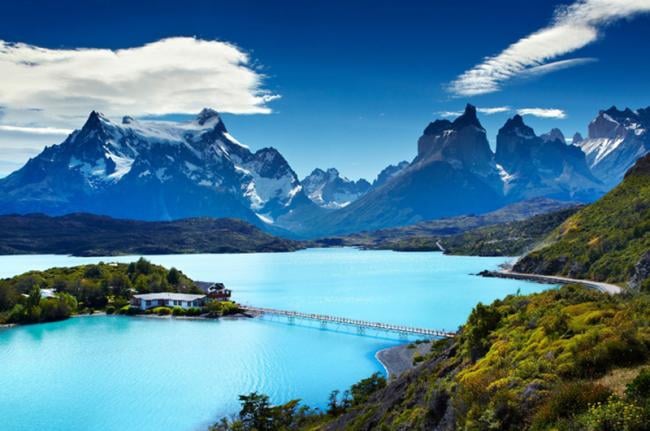 CONAF (National Corporation of Forest) administrates the area since 1973 and maintains a permanent occupancy at the park since 1975. The park rangers, women, and men that live in the park are essential to preserving the biodiversity of the area, their natural and cultural resources for the benefit of future and present generations.
In April 1978, the Park was started as Biosphere Reserve by UNESCO and since then it belongs to the selected group of representative areas from the different ecosystems of the world.

In November 2013, the website virtualtourist.com from TripAdvisor Media Group qualified the park as the 8th Wonder of the World, after a four months contest in which people had to choose one tourist destination among 330 different places of over 50 countries.

Torres del Paine National Park has experienced an important rise of visitors, 115.000 per year, being the third most visited park in the country.

History of the Park
About 12,000 years ago came to Southern Patagonia the first band of forager society, who years later was known as Aonikenk or Tehuelches (' People of the South' in Mapudungun). These bands belonging to an early man never occupied territories of the Torres del Paine National Park, however adjacent areas to the Park. To date, the oldest record that holds human life inside of this area is 6,500 years ago.

The first adventurer to transit these lands was the Baqueano Santiago Zamora (1870-1890), who became an expert on the region. Later came Ignacio Serrano Montaner (1846-1888) . Years later, the Chilean government sent to the area Tomas Rogers (1879-1890) to scout.

The first tourist expedition to Torres del Paine was organized in 1879 by Lady Florence Dixie, who along with a group of friends were the first tourists who came from Europe to contemplate the Paine mountain range. Then scientists Otto Nordenskjold (1895) and Carl Skottberg (1908) conducted reconnaissance expeditions.

In 1896 the British immigrant Walter Ferrier obtained government permission to settle on a parcel of land between Paine, Serrano, and Grey rivers in the northwestern tip of Lago Del Toro, starting there building a cattle farm, which would remain in operation until 1976, when its last owner, Count Guido Monzino, donated to the State of Chile to be appended to the National Park.

From 1910 to 1960, the largest livestock inside the park stage, where the livestock infrastructure gradually began to increase population centers, called “Estancias”, producing large amounts of cattle that were handled in areas not suitable for such purposes.

This whole process brought significant ecological consequences in the region, and the area of the Park was mainly affected by forest fires resulted from the clearing of land for use in livestock.

The damage caused to the land led to a greater awareness of preservation in both, government and community, so in 1930 started a stage of conservation to make this place a protected area that people could enjoy.