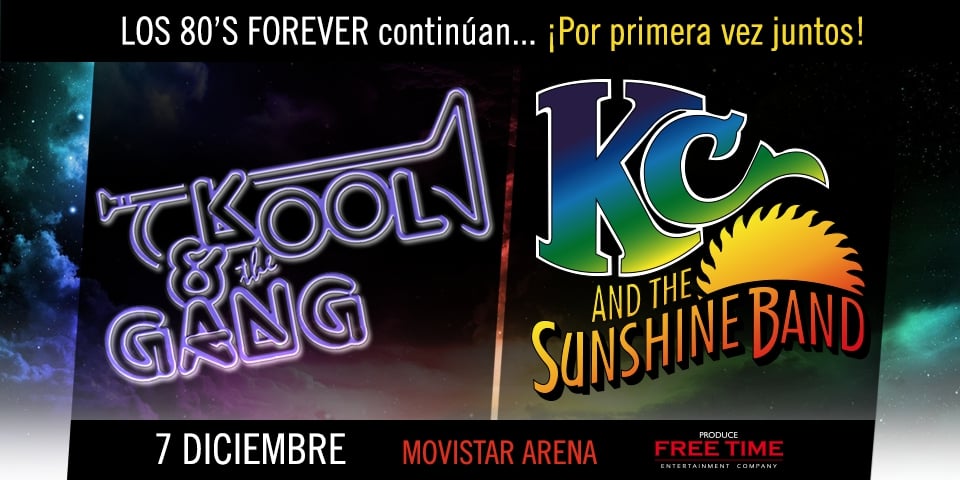 KC and the Sunshine Band & Kool and the Gang

The first time together

Kool & the Gang has influenced the music of three generations. Thanks to songs like Celebration, Cherish, Jungle Boogie, Summer Madness and Open Sesame, they have won two Grammy awards, seven American Music Awards, 25 Top Ten R&B, nine Top Ten Pop and 31 gold and platinum albums. Kool & the Gang has continuously performed for the past 43 years, longer than any R&B group.


The band's stellar reputation grew with each album, but the 1973 Wild & Peaceful gold record took Kool & the Gang to another level (# 6 R&B, # 33 Pop), spurred by the immortal funky party hymns Stuff, Hollywood Swinging and the platinum smash Jungle Boogie. Hits like Higher Plane (# 1 R&B), the classic Summer Madness (presented in the soundtrack of the Grammy Rocky-winning movie) and LPs Spirit of the

Boogie, Love & Understanding and Open Sesame. This last song was featured on the soundtrack of the best-selling movie of all time, Saturday Night Fever, the group winning its second Grammy.

In 1979, Kool & the Gang unveiled a new soft sound with Ladies Night. Produced by the legendary pop / jazz musician Eumir Deodato, it became his first platinum album. The number 1 song of R&B also reached # 8 in Pop. It was followed by Too Hot (# 3 R&B, # 5 Pop). The 80s would see them dominate the masses, starting with the double platinum album Celebrate (directed by the international monster Celebration, which spent six weeks on the R & B billboards and became the # 1 single).

Celebration, which rang when American hostages returned from Iran, remains rigueur on joyful occasions around the world. The hits Get Down On It, Take My Heart, Let's Go Dancing, Joanna, Tonight, Misled, the # 1 R & B, the # 2 Pop giant Cherish and the anthem # 1 R & B Fresh (these last three of the multiplatinum LP Emergency) solidified the international stardom of the group. Kool & the Gang got worldwide commercial support, supported countless charitable causes and was the only American group that participated in the 1984 project of Do not Know It’s Christmas by Band Aid for the victims of famine in Africa.

Today, the group enjoys worldwide fame, recognition and monitoring that spans generations, due in part to the extensive list of known groups. The drum rhythms of Kool & the Gang, the bass, the guitar and the distinctive trumpet lines, tie the tracks of numerous artists including the Beastie Boys, Jay-Z, Madonna, Janet Jackson, Cypress Hill and P. Diddy.

KC & The Sunshine Band, with more than 100 million records sold, three Grammy's, three American Music Awards and 25 years playing a very special funk, KC & The Sunshine Band returns to Chile to present a spectacular show, where attendees can enjoy and dance with his greatest hits like 'Boogie Shoes', 'Get Down Tonight', 'That's The Way (I Like It)', 'Rock Your Baby' and 'Please Don't Go'

KC and The Sunshine Band put rhythm to the 70's with a very special proposal. A mix of funk, R&B, disco, pop, rock and dance, plus a bit of Latin rhythm.

In 1975, with his self-titled album, KC met the success, surprising with the theme “That's the way (I like it)”, an irresistible dance piece, composed by Casey with Richard Finch, being recognized as one of the hymns of disco music and leaving the band in the history of popular music, gaining thousands of followers in the new generations, which undoubtedly transforms it into a must-see show.